A Brief Analysis of Term vs Whole Life Insurance

Download the ebook to discover the potentially-ruinous flaws with the way you're told to invest.

Figuring out the actual historical return of the market is not as easy as just averaging all the previous years’ returns.

So, when you hear people like Dave Ramsey and this bozo tell you that it’s averaged more than 12% per year, well...

That’s not the full story behind what you should expect...

I’ll walk you through the numbers to help you have a better idea of what you might be able to actually expect from the market...

In our last post, we talked about why we lean on the S&P 500 for historical insights as opposed to any other index. And, we discovered that the simple average return of the market since 1926 through the end of 2019 has been 12.1% per year.

Most advisors and pundits will use this 12% figure as an afterthought plug to help their client (or potential client) feel as though they’re being conservative with their projections for the client’s hard-earned dollars—a desirable trait in an advisor.

There’s one financial personality, however, who defends his 12%+ claims more vehemently than any other I’ve seen.

On his blog, in an article entitled “The 12% Reality,” Dave Ramsey cites similar S&P 500 historical data as evidence for his readers and concludes, “So you can see, 12% is not a magic number. Based on the history of the market, it’s a reasonable expectation for your long-term investments.”

This is the expectation Ramsey is setting for the millions who diligently heed his investment advice: “[12% is] a reasonable expectation for your long-term investments!” (emphasis and exclamation point added)

I should add that he is by no means the only one doing this ...he just so happens to be the loudest.

Now, if you discovered that the average annualized return was different than what you would actually realize, about which would you care more—the average or the actual?

In fact, wouldn’t that be the only one you care about?

If the average is meaningless to where your account will actually be in the future, why bother?

To understand this variance one has to look no further than the source that Ramsey himself cites in his post. (source)

Before you even get to the calculator that Dave’s team used to ‘prove’ his “12% reality” claim—right there at the top of the page—you find this warning:

“A problem with talking about average investment returns is that there is real ambiguity about what people mean by ‘average’. For example, if you had an investment that went up 100% one year and then came down 50% the next, you certainly wouldn't say that you had an average return of 25% = (100% - 50%)/2, because your principal is back where it started: your real annualized gain is zero.

“In this example, the 25% is the simple average, or ‘arithmetic mean’. The zero percent that you really got is the ‘geometric mean’, also called the ‘annualized return’, or the CAGR for Compound Annual Growth Rate.

“Volatile investments are frequently stated in terms of the simple average, rather than the CAGR that you actually get. (Bad news: the CAGR is smaller.)”

The CAGR is always smaller.

Unless an investment has the exact same return year in and year out, your actual realized gain will always be smaller than the simple average.

Consider the returns over 10 years of the following two investment portfolios. Which would you rather have? 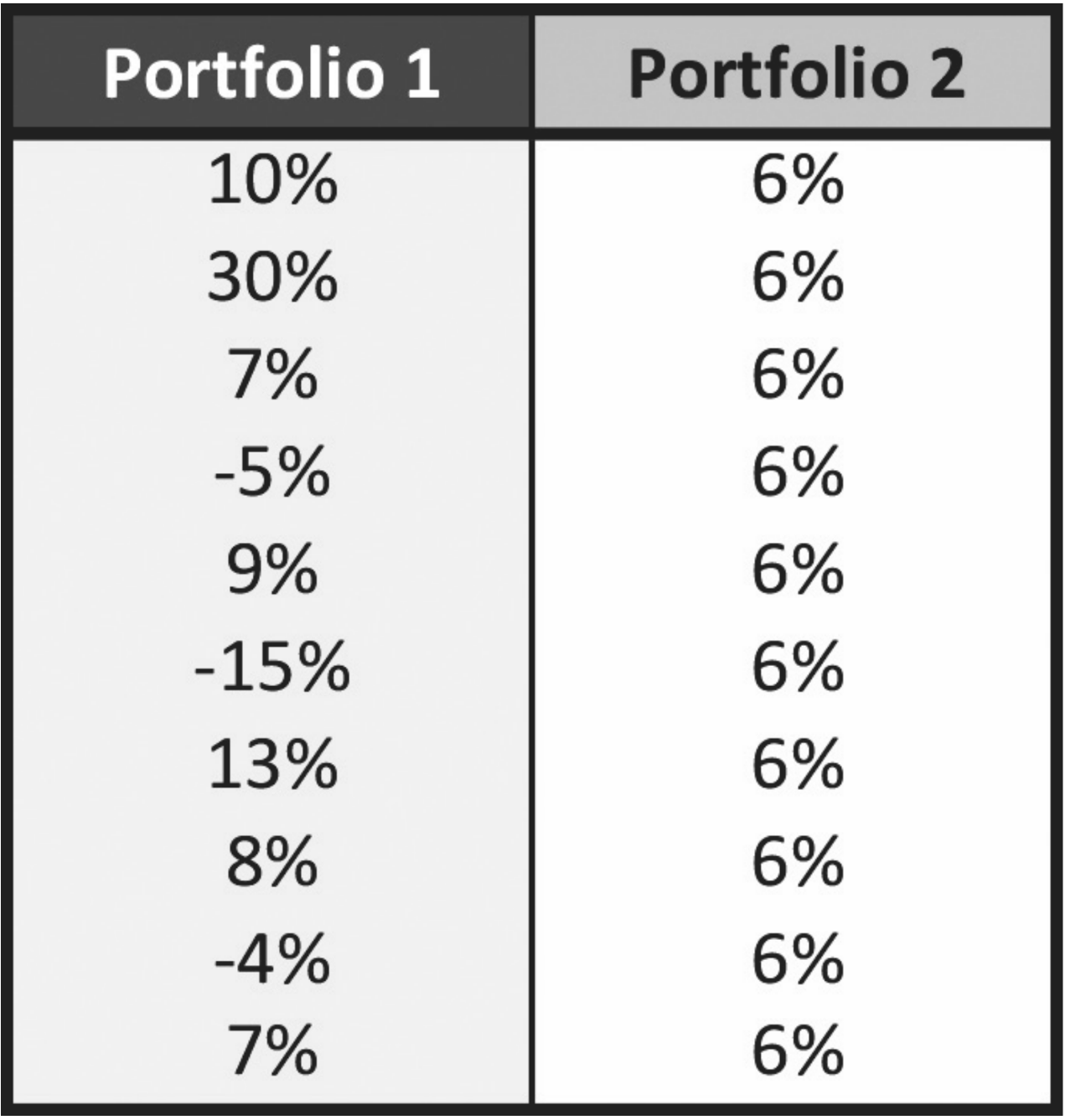 A simple value calculation reveals that both portfolios have an average annual return of 6%.

Yet, the dollar amount found in each of these portfolios at the end of this 10-year period is different...

That’s 10% of your original value less between two accounts with the same average annual return.

The actual realized return for Portfolio 1 (the geometric mean) was 5.38%.

That small 0.62% difference on a $1,000 initial contribution over just 10 years generated a slightly-more-than $100 difference between the two portfolios.

When you consider the amplified impact of negative returns, it isn’t hard to see why Portfolio 1 underperformed in the end. The damage done by losing periods far outweigh comparable positive returns.

Consider the fact that a 50% loss is much more impactful than a 50% gain.

It gets worse—the impact is exponential. The bigger the initial loss, the greater the gain required to make it back.

The track record of the S&P 500 provides us with 94 years worth of data points to aggregate, and there are some doozies in here that really drag on the historical geometric mean—like...

Although this 1.9% difference may not sound like a big deal at first, it makes a meaningful difference on a long time horizon.

All from a mere 1.9% difference in the annual return assumptions.

Of course, most people don’t have a 94-year time horizon for which they’re trying to plan. The difference is still consequential. Your actual portfolio value would be…

That means that even if everything goes according to plan (i.e. the market actually does continue to perform as it has in the past—spoiler alert: future posts and my book will have you questioning that), your $10,000 investment after 30 years has only grown to $184,000 while you were originally projecting (and planning for) $308,000.

Clearly, every percentage point has a meaningful impact when planning long-term.

So yeah… don’t base any of your plans on the expectation of making a 12% annual rate of return (at least, not in the stock market).

Even this 10.2% figure is still far too high for you to use for any realistic planning forecasts.

In our next post, we’ll explore some additional factors you should be aware of when planning your financial future.

And, if you’re sincerely interested in understanding some of the problems I’ve discovered with the financial industry, you should check out our private community.

I hope to see you in there! Regardless, I wish you all the best.

A Brief Analysis of Term vs Whole Life Insurance

Check It Out Now